“Roadshow” took artworks, artists and curators on tour to rural venues across the country. The project was devised and developed by Grizedale Arts, FlatPack001 and the commissioned artists. The outcome was three outdoor weekend events and two indoor gallery events, showcasing a wide range of new work, from live performance to film and video.

The publication is an attempt to convey the myriad facts of the Roadshow project; it randomly skates around the many aspects – from the artists’ perceptions of their roles to the audience interaction. The project became a bonding experience for the participants, one that wedded groups together and leaves a legacy of further collaborations and a new direction for many of the artists and audience. Texts in the catalogue are by Adam Sutherland, Mark and Stephen Beasley, Dan Fox and Bedwyr Williams. 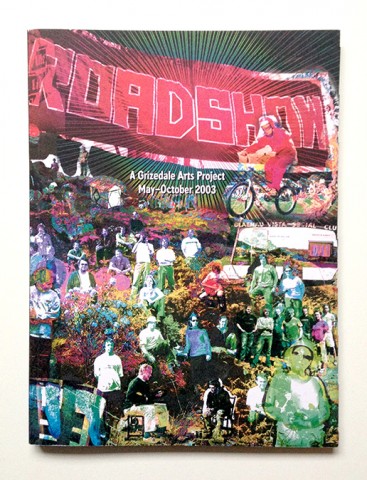