Pynchon describes the fundamental problems in “Low-Lands,” saying that he had let too many of his adolescent values creep into the story, ruining the otherwise sympathetic character of Dennis Flange, and that the short story was actually more of a character sketch than anything else. He points out, in the case of his latter complaint, that the work has no conflict resolution and very little movement — Dennis’ character doesn’t even grow much throughout its course.

In discussing the story’s corruption by his youthful values, Pynchon cites his early attitudes concerning marriage and parenting. More specifically, he suggests that (perhaps subconsciously) he had used Flange’s character as a screen on which to project his own desire to have children without the expense of a developed marital relationship. Another suggestion Pynchon offers is that perhaps Flange’s desires were a display of the general male attitude of the time, not simply his own, however he is unsure of which of the two would be the most accurate.

Pynchon also cites his adolescent views as the reason behind what he calls “an unacceptable level of racist, sexist and proto-Fascist talk throughout this story” (Thomas Pynchon’s Slow Learner, pg. 11). Apologetically, he admits that this was his own attitude at the time, and it was authentic, but simply “the voice of a smart-assed jerk who didn’t know any better” (Thomas Pynchon’s Slow Learner, pg. 12).

On a lighter note, the author is pleased to point out that “Low-Lands” features the first appearance of Pig Bodine, whom the story was originally supposed to be about. Pynchon describes how Pig’s character was actually based upon an infamous member of the Navy at the same time as Pynchon himself. In fact, Bodine’s abduction of Flange during the latter’s wedding reception was a true story the author heard from one of his senior patrol members. Pynchon finally states that it is because of these occurrences, among other factors, that Pig Bodine has managed to show up again in later novels. 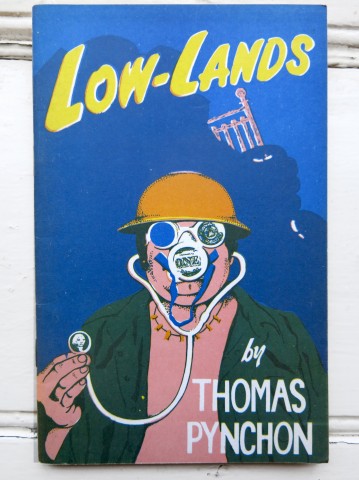