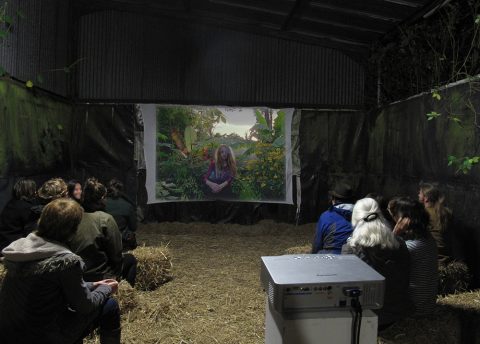 Films were screened in Barn, Stable and Library.

A selection of short artist films on a looped showreel were available for viewing throughout the day, as well as other short films relating to new food, farming and land practices.

Harvest Film Festival is a celebration and critical exploration of farming, food and land, through the medium of film. The festival builds on the success of the 2014 Food and Farming Film Festival and the 2015 Harvest Film Festival. In 2017 we were delighted to be collaborating with Common Ground, with support from Dorset AONB.

The daylong festival programme is a selection of feature films, documentaries and other moving image material exploring the themes of land use, agroecology and food production. Included in the programme will be a shortlisted selection of competition entries for the 2017 Harvest Short Film Competition, the result of an open call to filmmakers to submit films, under 15 minutes, relating to the festival themes. The prize-giving for the winning films will take place at Lower Hewood Farm, followed by a harvest supper to celebrate the event.